I have seen the movie Fifty Shades Of Grey. The film went in to world premiere on the 11th of February. It’s an erotic American movie. The story is based on the world famous three-part roman of E.L. James. It’s about the literature student (Anastasia “Ana” Steele) who interviews business man and multimillionaire (Christian Grey) for the university paper. The meeting with Grey changes her life and they start a sexual relationship, their relationship is mainly based on sadomasochistic role plays. Because Grey is emotionally damaged and this allows him to not experience intimacy in a normal way. He is afraid of let go of control. SM is the ideal way for him to don’t have to expose himself and to remain under full control. The leading roles are played by Jamie Dornan (Christian Grey) and Dakota Johnson (Anastasia “Ana” Steele). Since I haven’t read the books, I didn’t know what to expect of the film. It was a kind of hype. Apart from the comments of others, I went to watch the movie with a neutral feeling. Overall I liked the movie. I think that Jamie Dornan did a great job to play the role of Christian Grey. He brought the character to its fullest. Dakota Johnson did a good job, but she brought the character less to her right. Sometimes I found that she wasn’t spontaneous enough. In some scenes the music could be more intense for me. During whole the movie there was well-placed irony. All erotic souls of us, who loves a touch of romance, must see this movie!

You should have seen Fifty Shades Of Grey  to judge about it :o).

But I am already looking forward to the sequel! 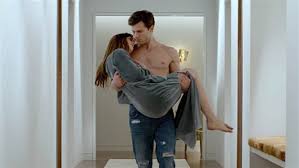